Last week Cloudy resident epidemiologist, Dr John McBeth, and I were invited to Delving into Digital, a showcase of health research innovation. The conference was organised by the Association of Medical Research Charities (AMRC) to bring members together to exchange best practice for developing electronic and mobile health research.

The day opened with a talk by Julie Dodd (Parkinson's UK's Director of Digital Transformation and Communication), who spoke about the use of technology to help patients with Parkinson's disease. She illustrated how technology could transform the lives of those affected by the condition, for example, smart watches might help patients find the best medication regime. She also shared the moving story of graphic designer Emma Lawton, who was able to draw again after a medical engineer designed a device that counteracted her tremors. Parkinson's UK is one of the charities behind 100 For Parkinson's, a smartphone app that collects information from people with Parkinson's about their condition. The results from this will be donated to Parkinson's health research. The interface may look familiar to Cloudy participants, as it was designed by Cloudy app developers uMotif.

The next speaker was patient leader Michael Seres, who told a very personal story. As a patient suffering from Crohn's disease and a two times cancer survivor, he visited a multitude of doctors. He realised that the patient experience is often not considered a central part of the healthcare process. Why couldn't he Skype with his doctor, instead of traveling for five hours for follow-up visits? Why couldn't his medical team share his test results using direct messaging on Facebook or Twitter? Instead of taking no for an answer Michael decided to advocate for these improvements himself. On his blog he documents his achievements (such as developing a patient-friendly stoma bag) and the journey towards these (having his blood test results become a trending topic on Twitter). This was an impressive talk, not least because Michael was dialling in from the States, where it was 2am!

Although mHealth developments are potentially hugely beneficial to patients, we soon learnt that innovating healthcare using technology is also a great challenge. There are issues around confidentiality, difficulties with bringing together experts from a variety of disciplines, and the process of attaining certification for an app or website as an approved 'medical device', which requires time and effort.

Nevertheless, these barriers have not prevented a number of charities from becoming involved in the process of innovating health research. Alzheimer's Research UK introduced us to Sea Hero Quest, a smartphone game that helps researchers to find out why people with dementia have problems with navigating space. Liam O'Toole, CEO of Cloudy funders, Arthritis Research UK, gave an inspirational talk about using 'cognitive computing' to automatically answer arthritis-related questions, relieving people from the need to search websites.

Another way of achieving innovation is a 'hackathon'. Jon Spiers of Autistica, the UK's leading autism medical research charity, explained that in a hackathon, a team of programmers have 24 (or 48) hours to make a prototype of a digital product that solves a specific problem.

Finally Michele Acton, Chief Executive for UK eye research charity Fight for Sight, shared how one doctor was able to change the lives of millions of people in low-income countries, by developing a Portable Eye Examination Kit. Dr Andrew Bastawrous is a Kenya-based ophthalmologist who co-founded PEEK, a low-cost smartphone ophthalmic tool that was designed to deliver eye care in some of the world's most challenging and resource-poor environments.

It was inspiring to see how technology can be used for healthcare research in so many fields. Alongside attending the talks we also had the opportunity to exhibit Cloudy. The attendees were very excited about the study, and shared our delight at having such an active Cloudy community. Just like us, they can't wait to find out the results! 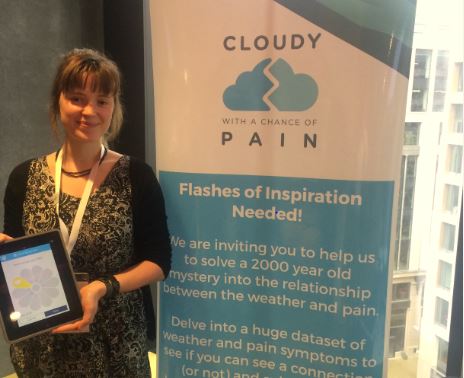 By Anna Beukenhorst, PhD student for Cloudy with a Chance of Pain.