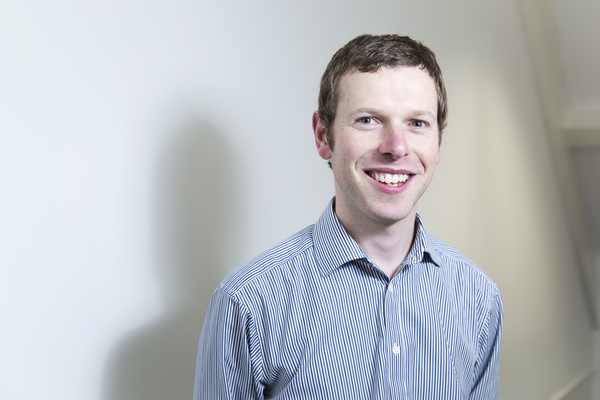 This week we meet a key Cloudy project team member, Medical Statistician, Dr Jamie Sergeant. Jamie tells us a bit about himself, his role in the project, and what he believes will be some of the statistical challenges we face when it comes to analysing the Cloudy data.

Can you tell us a bit about your role in the Cloudy project team?

I'm a medical statistician, which means that I'm interested in how we gather, analyse and interpret data to answer questions in medical research. For Cloudy, that means finding ways to make sense of the millions of data points that have been generated by our amazing army of over 13,000 participants as we attempt to better understand the nature of the relationship between weather and chronic pain.

What is your professional background? Could you tell us a bit about your PhD thesis, and your work into predicting the outcomes of elections?

Like many statisticians, I started by studying maths at university and then specialised with a doctorate in statistics. It's true that my PhD thesis was about social statistics rather than medical statistics, that is, using statistics to answer questions about society rather than about medicine. One problem that I looked at was trying to estimate how many people switch their vote from one party to another at successive elections. Most people will have heard things like “there's been a 5% swing from the Tories to Labour" on election night (the political landscape was rather simpler back then!), but swing isn't a great summary of how voting has changed if there are more than two parties getting a significant share of the vote. It would be much more informative if we knew how many people switched from Labour to the Tories, Lib Dem to Labour etc. The problem is that we don't know this, and of course it is a deeply personal issue for many people! All we know are the totals for the parties at each election, and that's where statistics comes in. We can use statistical methods to attempt to estimate the number of people who switched votes between any two parties, and to quantify how good we think these estimates are.

What are your current research interests? And why did you want to be involved in the Cloudy project?

My work is focussed on developing statistical models in musculoskeletal medicine to help us make predictions for individual people. For example, that could be trying to use information on people's individual characteristics, including their genetic code, to develop a tool that can predict which people are more likely to develop a disease like rheumatoid arthritis in the future, or to predict which people who have rheumatoid arthritis are more likely to respond to a certain treatment. This would be of great benefit to patients. If you could predict who is more likely to develop a condition in the future, you could ensure that the condition is picked up early and treated accordingly, or perhaps even prevented from occurring altogether. If you could predict that a patient is very unlikely to respond to a certain treatment, you wouldn't need to waste time and money treating them with something that is not going to be effective for them, while their condition potentially worsens. Instead, you could go straight for an alternative treatment that is more likely to work for them.

The appeal of the Cloudy project for me is simple and probably similar to part of the appeal for many participants. How often do you get a chance to solve a question that's been around for hundreds, even thousands of years? And such a straightforward question that most people have some connection with, “what's the association between weather and pain?" To be able to use modern technology to empower participants to provide the data necessary to tackle this question and then have the challenges of analysing that data is great.

What do you think are the greatest statistical challenges faced by the Cloudy study?

The first challenge is the sheer amount of data to analyse. If you tried to put it all in one spreadsheet it would run to millions and millions of rows. Imagine trying to do anything with that without crashing your computer! There are also real challenges in being able to tease out connections between weather data that is measured hourly at the Met Office weather stations and pain data that is being provided daily by our participants, while taking account of the role of the other symptoms that feature alongside pain in the motif.

What's next for you after Cloudy?

I think Cloudy will be seen as a landmark study, not only in investigating the relationship between weather and chronic pain, but in how medical research more widely can be conducted. Technologies like smartphones allow researchers to gather data much more frequently and from a greater number of people than was possible in the past. But with new methods of gathering data come new challenges, and there are plenty of challenges here to keep statisticians like myself occupied for some time!