View the results of our preliminary analysis

Cloudy with a Chance of Pain is a national smartphone study exploring the relationship between the weather and chronic pain. A 2000 year old mystery, advances in smart phone technology mean that we are now able to investigate this relationship properly for the very first time. Participants are asked to track their daily symptoms, whilst their mobile phones transmit the weather conditions that they are experiencing at that time.

This summer, after 6 months of data collection, we asked a team of data science interns at the Alan Turing Institute in London to undertake an initial analysis of the 2.2 million pieces of data that have been submitted so far.

The team looked at three regional areas focussing on the percentage of time participant's reported being in severe pain, temperature levels, number of sunny hours and the amount of rainfall for February, April and June.

Their analysis has yielded some interesting results, revealing that as the number of sunny days increased between February and April participants across all three regions experienced a reduction in the number of days they spent in severe pain. This trend was reversed however in June, which despite being warm was a particularly wet month. We can see that the number of days spent in severe pain increased markedly for participants in Leeds and London, positively correlating with the high rainfall levels.

We are looking forward to delving deeper into the data, strengthening the support for the relationships that we can see here and exploring how other types of weather might affect pain. To do this we need periods of consistent daily symptom tracking from our participants for the next 6 months. We think there's something there, but we need your help to get to the bottom of it!

Our partners at The Office for Creative Research have designed this handy graphic visualising our preliminary findings. 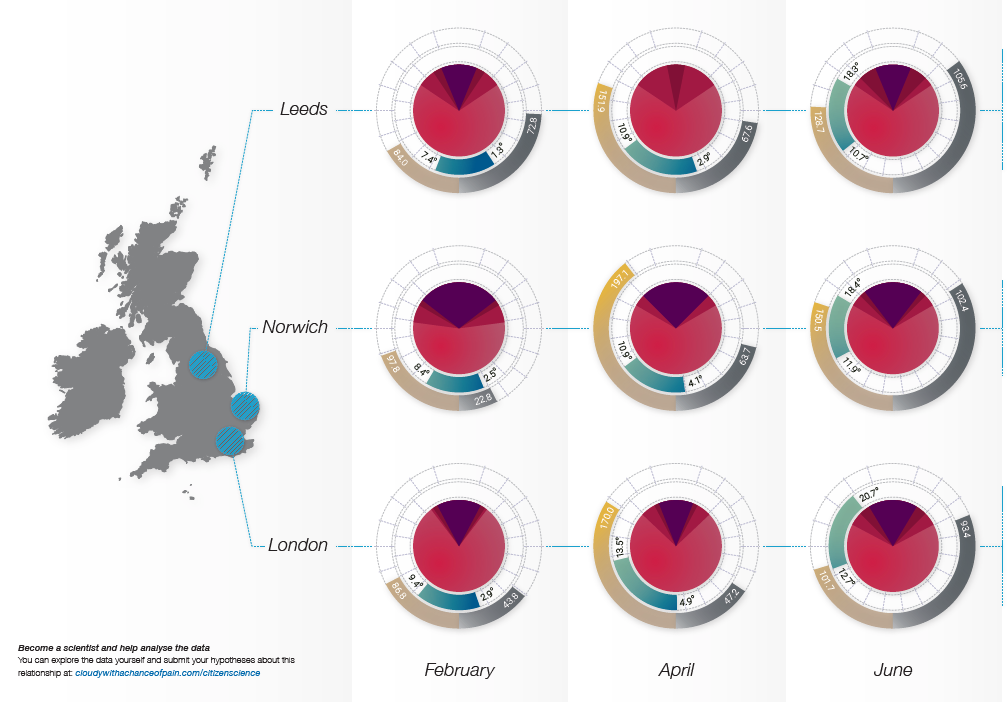 Key to understanding the graphic: 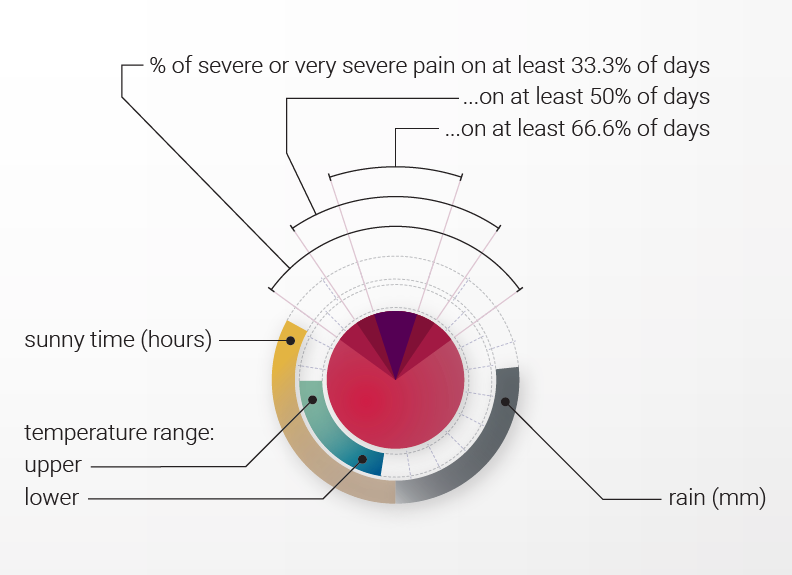 The results of each region explained:

Participants spent fewer days in severe pain in April when compared with February in Leeds. In fact none of the participants here reported experiencing severe pain for two thirds of the month or more in April, which may be associated with double the number of hours of sunshine for that month when compared to February.

In June despite higher temperatures and a similar number of sunny days to April the amount of time spent in severe pain has returned to February levels, suggesting that the high levels of rainfall over the month may have contributed to an increase in pain levels.

Participants here spent the greatest amount of time in severe pain in February when temperatures were lowest and there were the fewest sunny days.

The number of days spent in severe pain reduced in April, possibly due to the greater number of sunny days. Severe pain levels are largely the same for April and June, despite a significant temperature increase, suggesting high rainfall over this month had the greatest influence on pain levels.

Participants spent more time in severe pain in February than they did in April, as temperature levels rise and the number of sunny days increase.

In contrast this trend reverses in June, which although warm was particularly wet, with more participants reporting that they had severe pain than in February or April.